Commercial Center is not a mall. It’s also not a mall, although in 2016 Vice article, writer Steve Friess dubbed it “The Weirdest, Weirdest Mall in Vegas.”

We can’t call it that for the simple reason that this nearly 60-year-old cluster of retail centers — laid out in a near-perfect square with thousands of unshaded parking spaces — is owned by multiple different owners. Actually it’s a few malls that just hang around. Comfortable, Vice Also known as the “district,” the Commercial Center covers a whopping 85 acres – sure, why not?

Vice was also right about the diversity of the Commercial Center. Here you’ll find Lotus of Siam, a northern Thai restaurant of international renown (although still temporarily closed for refurbishment); the Green Door, an 18,000-square-foot swingers club with “voyeur” areas and “orgy beds”; the Vegas and Nevada Rooms, twin showroom supper clubs; a wide variety of casual dining options, from a Colombian bakery to a Mediterranean bar and grill; the Sahara Event Center, a cavernous roller skating and event space that was once home to Led Zeppelin and the Doors; and how Vice promised a slew of LGBTQ shops, including the venerable Spotlight Lounge and Badlands Bar.

Then there’s New Orleans Square, the property at the southwest corner of the Commercial Center. It’s visually distinct from the other retail complexes — two-story, with its own courtyard, Big Easy-inspired wrought-iron detailing, and murals by local artists like Recycled Propaganda and Gear Duran. And, somewhat inexplicably, this standalone retail plaza, independent even of the Commercial Center itself, is fast becoming the hottest arts and culture district in the Valley, complete with multiple galleries and event spaces, a 1990’s-style coffeehouse, a 1970’s-inspired bar, and much more, all thanks to a father-daughter trip to Black Rock City.

“My father was a big commercial real estate entrepreneur for 30 years,” says Chelsey Kelly, operations director at McMenemy Investment Services, the current owners of New Orleans Square. Her parents, Ron and Judy McMenemy, bought NOS in the mid-’80s for its courtyard, says Kelly. “They loved the fact that it had its own little private area where things can happen, and things do currently happening.”

These court events—film screenings, art walks, and other local cultural events—are happening because Chelsey took Ron to Burning Man about five years ago and he absolutely loved it.

The front of New Orleans Square.

“He fell in love with the art world and said, ‘Wow, we have to do that,'” says Kelly. “So we started to shake things up, bring more of the art community here and create what we call a family. It’s not just a place where artists and tenants come and have a great place to stay; It’s a place to get involved… to enjoy being with your neighbors, collaborating and building something better than just ‘Hey, this is my business.’”

The McMenemys’ drive to attract art-friendly tenants coincided with rising rents in the Arts District, which attracted a slew of galleries and arts-centric businesses that couldn’t find affordable real estate amid Downtown’s sprawling brewpubs and upscale restaurants. New Orleans Square, with its downtown location, plentiful and easily adaptable space, and art-friendly owners, couldn’t be a better fit.

“I couldn’t afford the square footage downtown, and I really can’t afford it now,” says Nancy Good, whose Core Contemporary gallery occupies a large space on the second floor of the NOS. “And this is such a unique and historic property; This was the place to be and be seen. You know, there was art, designer clothes, furriers and jewelers, gourmet restaurants and all that stuff. And where in the city are there over a thousand free parking spaces? It was the place to be years ago and I consider it the place to be now.”

If you are visiting NOS for the first time, the galleries are actually an excellent place to start. core contemporary (corecontemporary.com) Goods features detailed, funky work – in fact, she’ll likely be working on several at once when you visit – as well as works by other local artists. A small stage hosts performance artworks such as Clarice Tara’s 2018 dissonance. And performance is the primary driver of The place of truth, a “poetry gallery” that features open mics from Spit Your Truth on Sundays at 7pm and is known to host occasional music showcases; The website has details below thetruthspotlv.net/events.

And there’s more to be said for Jessica Oreck’s quiet grandeur Office for Collection and Design (officeofcollecting.com) than can be said here. Suffice it to say that there is absolutely nothing quite like it in this city, nothing at all. Anyone who owns a copy Atlas Obscura should schedule a visit immediately. (The gallery is largely accessible by appointment only, although Oreck has regular Wednesday classes; visit the website for details.)

The retail offerings at New Orleans Square are as ornate as its art. The Sci-Fi Center (thescificenter.com), an institution that has left a cultural footprint large enough to have done so Weekly‘s Cover in 2015, isn’t just a comic and toy store; It’s an explosion of nonjudgmental sci-fi, superhero, and horror fandom that wraps around its owner, William Powell, like an exo-suit of sheer enthusiasm.

Speaking of horror, HellBound Horror collectibles (hellboundhorror.com) has it stocked in abundance, with a wide selection of dolls, art and other collectibles in the genre for the discerning fan. Everyone from Beetlejuice to Freddie Krueger to Baphomet is here and eager to be unleashed on your suburban home .

But what really makes a place linger is its drinks and restaurants, and New Orleans Square offers two of the most interesting New-ish slopes in the Valley. Fort Bedlam (fortbedlam.com), a Seattle-born coffeehouse that relocated to Vegas in the midst of the pandemic doldrums, is a wonderful place to spend an afternoon, an evening, or hopefully a lifetime; Anyone with fond memories of long-defunct Vegas cafes like Copioh, Enigma, or Espresso Roma will feel right at home here among the weather-beaten tables, board games, and whimsical artwork. The coffee is damn good too. And the Sci Fi Center now hosts many of its screenings here, including upcoming viewing parties for game of Thrones prequel series house of the dragon. It is known. 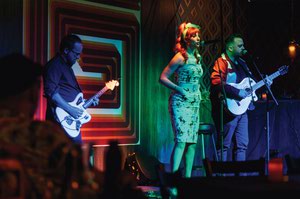 You really feel the love that went into the creation square (squarebarvegas.com), a space strongly reminiscent of the opening of New Orleans Square in the mid-1970s. It’s what Nancy Good calls an “it-takes-a-village” project: the McMenemys conceived it, Good painted its interior and exterior geometric murals, and Phil Kotler, whose acclaimed local improv troupe Bleach reportedly created a NOS Room has in mind is the bar’s entertainment director, bringing a mix of comedy, burlesque and musical performances to the Square’s intimate stage. The kitchen serves 24-hour bar bites and wake n bake breakfasts, a vintage stand reminds you of your visit home, and the gender-neutral bathrooms are covered in wild murals. (Both Kelly and Good have personally painted booths; they’re Instagram-worthy.) The Square Bar feels grounded — both in its historic location and in the community of like-minded people who are neighbors.

There’s more to New Orleans Square – the offices of Gender Justice Nevada; multiple health and beauty services; and various other galleries and arts organizations I didn’t have time to visit, including the home of the Vegas chapter of Sisters of Perpetual Pleasure.

(Between the Sisters, Fort Bedlam, and the gay bars in nearby plazas, one could argue that the Commercial Center is a scaled-down simulation of Seattle’s Capitol Hill neighborhood, or at least what it was like before gentrification.)

and Sista Kim’s kitchen (sistakimskitchen.com), a stationary version of the popular Southern-style food truck, was due to open soon.

Hopefully it will continue what was started at New Orleans Square in recent years. It’s perfectly reasonable to worry about what will happen to the rents—and to these buildings themselves—if the Commercial Center achieves commercial success on an Arts District level. And another immediately pressing concern has arisen: as I began this story, the news broke that NOS, the entire place, is now on the market. It’s an unfortunate inevitability due to the heartbreaking loss of Ron McMenemy last May and the death of Judy McMenemy nearly a year earlier.

Regardless, Kelly says she’ll keep her stake in Square Bar and hopes whoever buys NOS will keep her as the operator.

“It’s very important these days to have management that cares – that likes to be there as part of the community,” she says. “I hope I can continue to lead that [New Orleans Square] Family.”

click HERE to subscribe to Weekly Fix, the digital edition of Las Vegas Weekly, for free! Stay up to date with the latest Las Vegas concerts, shows, restaurants, bars and more, delivered straight to your inbox!